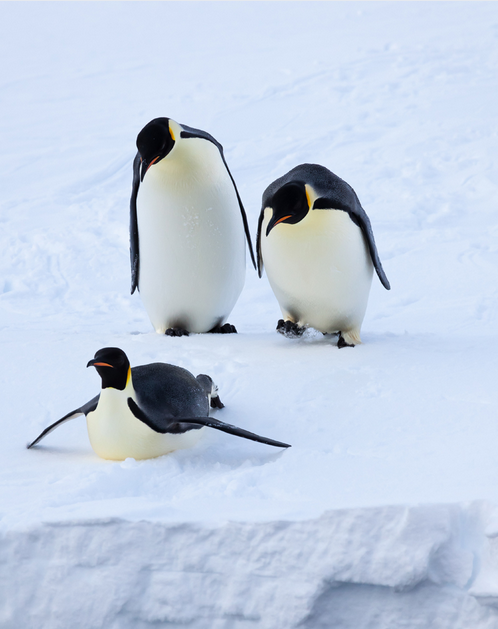 All 45 known emperor penguins colonies in Antarctica could be in decline by the century’s end, making this species, “fully deserving of endangered status due to climate change”, according to a new study published in Nature Climate Change.

Declines could be severe in at least two thirds of the colonies, where numbers could drop by more than half. The reason: loss of Antarctic sea ice. The emperor’s survival hinges on this frozen platform for every stage of its life cycle. Sea ice provides a haven for raising chicks, a launch pad for hunting trips, and marine habitat for key prey species, including shrimp-like krill.

The new study, by an international team of researchers, modelled how current and future sea ice concentration (based on IPCC projections) could affect emperor populations, accounting for specific conditions at each colony.

The emperor’s last stand against climate change is likely to be at the Ross Sea, where the southern ocean cuts deep into the frozen heart of Antarctica. Now home to about a quarter of all breeding emperors, the Ross Sea could be the best area to focus future conservation efforts, the study’s authors assert. However, lead author Stephanie Jenouvrier said in a media statement that, “None of the colonies, even the southern-most locations in the Ross Sea, will provide a viable refuge by the end of 21st century.” This highlights the importance of reducing greenhouse gas emission to prevent the more severe consequences of climate change.

Emperor penguins are challenging to study because they breed in the coldest environment of any bird, enduring sunless, Antarctic winter days with temperatures that can plunge below minus 60 °C.

The new research builds on a rare and exceptionally long record of observation at Terre Adélie, in eastern Antarctica.  Fifty years of detailed study of emperor mating, chick-rearing and foraging has revealed that the sea ice / emperor population equation is not always straightforward. Fast sea ice (that is, sea ice connected to land) is a vital feature of most breeding colonies, but if the ice is too extensive, and a female emperor takes too long to make her mid-winter commute between the crèche and open water feeding grounds, the starving male may abandon their egg to save himself.  On the other hand, reduced sea ice extent has been linked to other problems, such as lower numbers of krill, leaving less food for penguins.

Nevertheless, overall and over the longer term, sea ice decline is expected to reduce emperor penguins’ total global population by one fifth at the century’s end. Good estimates of the global emperor population are now available thanks to satellite imagery, indicating a population of almost 600,000 birds today. Although the new study finds that some colonies could increase for a while, any growth is expected to be short-lived, with numbers ultimately falling as Antarctic sea ice diminishes.

Explaining why an endangered listing for emperor penguins is important now, Jenouvrier said this, “will provide some tools to improve fishing practices of US vessels in the Southern Ocean, and gives a potential tool to help reduce CO2 emissions in the US under the Clear Air and Clean Water Acts.”

University of Amsterdam (2014) Future of emperor penguins on thin ice.